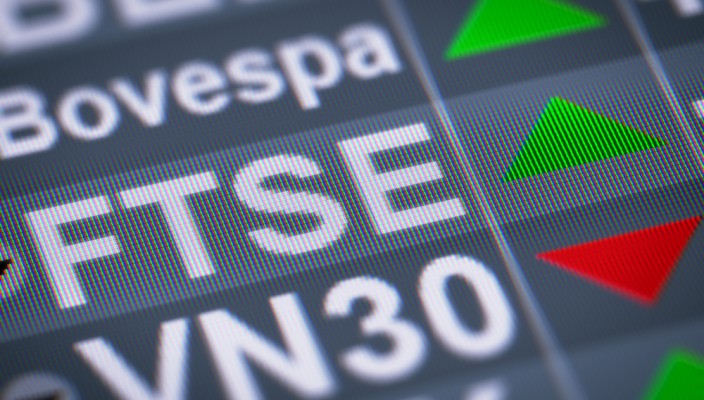 European and US equity markets experienced volatile trading conditions during Monday’s trading sessions. The reasons were various. The leading UK index the FTSE 100 enjoyed a significant rise during the London open due to Brexit fears fading and optimism regarding the start of the Astra Zeneca Oxford vaccine rollout given to the most vulnerable and elderly UK citizens.

At one stage the FTSE 100 index was up over 3% and breaching R3 before giving back some gains to close the day out 1.53% up. The DAX 30 and CAC 40 closed marginally up. A bullish December manufacturing PMI for the UK, combined with the highest number of monthly mortgages granted for 13 years in November, helped alleviate any lingering negative Brexit sentiment.

The UK pound and the leading indices will come under intense scrutiny over the coming sessions after the UK prime minister announced another harsh lockdown on Monday evening, after the COVID-19 virus has run amok through UK society over recent weeks.

EUR/GBP traded up 1.13% reclaiming the 0.900 level-handle to trade above R1 at 0.9035. When analysed on the daily chart the price of EUR/GBP is close to both the 100 and 50 DMAs. As closely watched moving averages, if they cross, it can indicate there’s been an institutional change in broader sentiment. Versus the haven currencies of JPY and CHF the UK pound fell, GBP/JPY traded in a wide bearish range, breaching the third level of support S3 and down –0.83% during the later stages of the New York session.

Precious metals enjoy a bullish start to the year

The safe-haven investments of gold and silver were in demand during the day’s sessions. XAU/USD traded in a vast bullish range, breaching $1,920 per ounce and R3 during the Asian session rising 2.28% reaching an intraday high of 1942, a level last printed on November 9. Silver rose by 3.3% to $27.02 per ounce.

US equity indices slumped sharply during the New York session; the DJIA 30 fell beyond S3 during the session before recovering and oscillating around the S3 level and trading at 30,174 down 1.50%. The 30,000 handle remains a psyche handle and magnet for buy and sell orders; therefore, it’ll take a significant sentiment shift for this level to be breached significantly to the downside.

The NASDAQ also sold off during the NY session before staging a modest recovery during the session; the index traded down 1.40%, with most of the most popular stocks down.

The reasons for the US equity markets sell-off involved politics and fears of new variants of the COVID-19 virus. Market investors are collectively concerned that Biden and the Democrats having a majority in the Senate would deliver sweeping powers to the new president to enact a centre-left political plan, including a fairer tax system.

Combined with these factors a recording of Trump trying to overturn the election result by asking the Georgia governor to find an extra 11,780 votes has caused concerns over the outgoing president’s grasp on reality. And with US military and naval activity ramping up in the Strait of Hormuz, there are worries that Trump may cause chaos before he exits the White House.

Another theory suggests that recent valuations had reached ridiculous highs, and a pullback was well overdue. The most recent stimulus finally agreed by the US Senate may already be priced in; therefore, further rises based on exuberance and hype instead of fundamentals may be challenging to justify.

In the afternoon concentration turns to the US economy as various ISM readings get published. The critical reading to look out for is manufacturing orders, which is forecast to reveal a moderate fall; from 57.5 to 56.8. Towards the end of the New York session, John Williams, the New York Fed president and CEO, will deliver a closely monitored speech. A Fed colleague of his Mr Evans recently stated that monetary easing would need to be a permanent Fed policy feature in the coming years. Investors might be listening for confirmation of this policy to adjust their market positions accordingly.