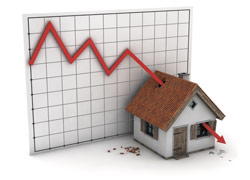 House prices have continued falling across the USA despite the wider economy improving according to a closely watched survey published on Tuesday. For the second consecutive month home prices fell in 19 out of 20 cities measured by the S&P/Case-Shiller index, leaving average prices at levels not seen since the mid-2003.

This was the third month in a row that average prices have fallen. In November prices declined 0.7% (on a seasonally adjusted basis), a bigger drop than the 0.5% economists had expected. The decrease followed a 0.7% decline in October. Prices in the 20 cities steepened their year-over-year decline, falling 3.7% compared to a 3.4% decline in October.

2012, A Record Start To The Year
Global equities have experienced the best start in 18 years, topping gains in commodities and handing investors January’s best returns, as U.S. economic growth shows signs of improving and European leaders move closer to a solution on the region’s debt crisis.

Almost $3 trillion has been added to stock values and European shares ended a five-month bear market as economists lifted forecasts for U.S. GDP. Reports showed American unemployment and Chinese inflation have declined, whilst German investor confidence improved, the U.S. Federal Reserve has pledged to keep interest rates near zero percent through to 2014.

European stocks have had their best monthly start to a year since 1998, most countries in the region have agreed to tight budget controls whilst Greece has made progress on debt restructuring talks.

Germany Driving The Fiscal Compact Ahead
Germany set the terms for saving the euro as EU leaders sealed agreement on a new “fiscal compact” for the single currency zone, enshrining Berlin’s insistence on discipline whilst establishing a new punitive regime for budgetary failure. Chancellor Angela Merkel returned to Berlin with the new treaty agreed, however she is isolated in Europe on her hard line stance versus Greece and how to prevent the country from defaulting on its debt.

All EU countries except Britain and the Czech Republic signed the new pact on Monday night, Poland and France had a disagreement over who would be allowed to take part in the twice-a-year eurozone summits which are a feature of the new regime.

The treaty empowers the European Court of Justice as enforcer of fiscal rectitude in the eurozone, making it possible to levy fines versus countries in breach of the new rules, whilst obliging all eurozone countries to introduce binding legislation or constitutional amendments abolishing governments’ rights to run up excessive levels of national debt.

EU leaders are waiting for a report on Greece’s compliance with the terms of its bailout from the European Commission, European Central Bank, and International Monetary Fund before deciding what to do about a second €130bn bailout which needs to happen in March in order to avoid a Greek default.

Agreeing with to Berlin on new fiscal rules will make ease further provision for Greece, whilst increasing the firewall of bailout funds intended to stabilise the euro and ward off the risk of contagion from Greece to Italy and Spain.

Athens Deadlock?
Greek officials launched a behind the scenes attack on European Union and International Monetary Fund negotiators as talks in Athens over the country’s mounting debts appeared stalled.

Prime minister Lucas Papademos told aides that a crisis meeting of party leaders would be called as early as Thursday to thrash out a response to a harsh negotiating team sent by Brussels, which is demanding severe austerity measures before sanctioning a further €130bn of bailout funds.

Greece’s finance minister Evangelos Venizelos said that he believed an agreement on the debt swap was close;

We are one step away. I would say it is a formality away from finalising the debt relief agreement

However, a government aide was quoted as saying;

The next few days will determine what happens over the coming decade. The troika doesn’t appear to be willing to accept any concessions whatsoever on reducing the minimum wage and scrapping bonuses. No political party is willing to move either, saying wage cuts are a red line they are simply not going to cross. You tell me how this is going to be resolved. We have no idea and we’re very worried.

Portugal will sell 105-day and 168-day bills today. Standard & Poor’s increased the number of Portuguese banks on “credit-watch negative” after it cut the sovereign rating of the country. Yields on Portugal’s two-year notes soared to a record 21.82 percent yesterday.