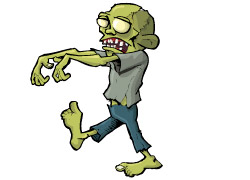 A Dead Person Can Be Revived By A Bokor, Or Sorcerer

Nov 25 • Between the lines • 1922 Views • Comments Off on A Dead Person Can Be Revived By A Bokor, Or Sorcerer

According to the tenets of Vodou, a dead person can be revived by a bokor, or sorcerer. Zombies remain under the control of the bokor since they have no will of their own. “Zombi” is also another name of the Vodou snake lwa Damballah Wedo, of Niger–Congo origin; it is akin to the Kikongo word nzambi, which means “god”.

There also exists within the West African Vodun tradition the zombi astral, which is a part of the human soul that is captured by a bokor and used to enhance the bokor’s power. The zombi astral is typically kept inside a bottle which the bokor can sell to clients for luck, healing or business success. It is believed that after a time God will take the soul back and so the zombi is a temporary spiritual entity. It is also said in vodou legend, that feeding a zombie salt will make it return to the grave…

It’s not entirely clear what ‘spooked’ European investors prior to last week’s latest “make-or-break” summit (the 14th such “crisis summit” in 21 months), investors were possibly concerned with regards to the: unsustainable build-up of credit, credit risk and leverage. Miraculously those concerns were put to rest, because the Euro Zone’s leaders have pledged more: credit, more credit risk, and more leverage. President Sarkozy and Chancellor Merkel have bought more time in Zombieland, and the time is paid for with, (you’ve guessed it) yet more borrowed zombie currency..

Politicians have employed similar tactics throughout the years in their attempts to make problems ‘go away’. One tactic employed can be boring their audience with the same content or rhetoric to the point were the listeners are completely put off and switch off, unfortunately this tactic simply won’t wash with the Eurozone crisis. This isn’t a politician caught in the headlights of a scandal hoping the flames of the furore will simply die down, this crisis cannot be soothed away and the passage of time cannot heal it. But here we are, fourteen meetings later and still no solution or compromise, just the same empty soundbites, day after day, week after week. Out of this united states of suspended European animation a leader has to surely emerge.

“It is necessary for him who lays out a state and arranges laws for it to presuppose that all men are evil and that they are always going to act according to the wickedness of their spirits whenever they have free scope.” –

“I’m not interested in preserving the status quo; I want to overthrow it.”

“A return to first principles in a republic is sometimes caused by the simple virtues of one man. His good example has such an influence that the good men strive to imitate him, and the wicked are ashamed to lead a life so contrary to his example.” – Niccolo Machiavelli

Euro bonds are “not needed and not appropriate,” Angela Merkel said at a press conference with Italian Prime Minister Mario Monti and French President Nicolas Sarkozy in Strasbourg, France. Merkel said the proposals for more intrusive powers to enforce EU budget rules, including the right to take delinquent governments to the European Court of Justice, were a first step toward deeper fiscal union. But she said they would not modify the statute and mission of the central bank, nor soften her opposition to issuing joint euro zone bonds, except perhaps at the end of a long process of fiscal integration.

“This is not about give and take. Only when European countries reformed their economies and cut their deficits would borrowing costs converge. To try to achieve this by compulsion would weaken us all.” – Merkel

With contagion spreading fast, a majority of 20 leading economists polled by Reuters predicted that the euro zone was unlikely to survive the crisis in its current form, with some envisaging a “core” group that would exclude Greece.

Analysts believe that sense of crisis will in the end force dramatic action. “I think we are moving closer to a policy response probably, which could be either more aggressive ECB action or the idea of euro bonds could gain some traction,” said Rainer Guntermann, strategist at Commerzbank.

Hungary
Moody’s Investors Service downgraded Hungary’s government bond rating by one level to Ba1 from Baa3, and is maintaining a negative outlook. The foreign- and local-currency bond ratings were cut one step to Ba1, the highest junk-level score, from Baa3, the company said today in a statement. Moody’s, which awarded Hungary its investment grade in 1996, assigned a negative outlook. The country is rated the lowest investment grade at Standard & Poor’s and Fitch Ratings.

The government has scrapped two debt sales and reduced the size of another eight auctions in the last three months as the euro region’s debt crisis deepened. Prime Minister Viktor Orban’s Cabinet on Nov. 17 asked for IMF “insurance” that doesn’t entail a loan and doesn’t impose conditions.

“The first driver of today’s downgrade is the uncertainty surrounding the Hungarian government’s ability to meet its targets on fiscal consolidation and public sector debt reduction. Hungary’s recent requests for assistance from the IMF and the EU illustrate the funding challenges facing the country.” – Moody’s

There are no economic calendar data releases for the morning European session that may affect market sentiment.

« The End Of The Road Evacuate The Dance Floor »