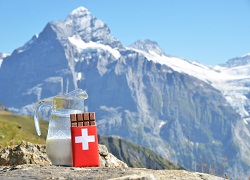 It’s not often that we flag up the performance of the Swiss economy in our mind the gap column but we felt it justified special mention and focus this morning given the perfect economic microcosm and model the country projects. Not only have retail sales risen by circa 1.1% month on month and the country’s inflation figure been under control for some time, it’s export driven economy and its investment service led economy are firing on all cylinders.

That other ‘model’ economy, despite its soar away house price issue, Australia has also seen a muted reading early this morning. The NAB Monthly Business Survey – March 2014 saw sales falling slightly in March and employment, though better, still points to soft labour market conditions. Most industries saw some improvement in conditions, especially mining.

Wall Street’s third consecutive sell off day weighed on certain Asia-Pacific markets, with Japanese bourses experiencing the worst of the fall. The S&P 500 lost 1.1 per cent to 1,845 on Monday, leaving it 2.7 per cent down from an intraday record high of 1,897 struck in early trade on Friday. The DJI average has now lost all of its 2014 gains. Tech stocks led the sell-off as valuation concerns grew. The tech-heavy Nasdaq suffered more than other US indices, falling 1.2 per cent to 4,079.8 on Monday.

The Bank of Japan stuck to its existing monetary stimulus on Tuesday, confident that it did not need further support measures to beat chronic deflation even as a sales tax hike clouds the outlook for the world’s third-largest economy. Japan’s current account is back in surplus. After a four month string of current account deficits, the nation produced a Y612.7bn surplus in February, in line with forecasts. A month earlier, the monthly deficit had been Y1.589tn – the largest gap on record going back to 1996.

Swiss unadjusted jobless rate down at 3.3 pct in March

The yen reached 102.75 per dollar, the strongest since March 28, and was at 102.88 early in London, up 0.2 percent from yesterday’s close. It gained 0.8 percent in the prior two sessions. Japan’s currency added 0.2 percent to 141.40 per euro. The euro was little changed at $1.3744 following yesterday’s 0.3 percent gain. The yen rose for a third day and a measure of implied rate swings in currency markets fell to a seven-year low as the Bank of Japan refrained from adding extra stimulus at a policy meeting.

New Zealand’s dollar rose 0.4 percent to 86.40 U.S. cents after a report showed first-quarter business confidence in the nation held near at a 20-year high.

Treasuries yielded 107 basis points more than Japanese bonds as of yesterday, based on the Bloomberg World Bond Indexes. The spread was 50 basis points a year ago.

The extra yield Treasuries pay over Japanese bonds doubled from a year ago as the Bank of Japan said it’s sticking to its plan to push down borrowing costs.