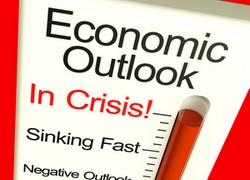 “I’ve Never Been As Scared As I Am About The World” – Donald Tsang CEO of Hong Kong.

The French government looks set to revise downwards its estimate for 2012 economic growth in an upcoming revision to its budget bill. Sources told reporters following a televised interview with President Nicolas Sarkozy that the government envisages cuts to spending, an austerity drive, as opposed to further tax rises, in order to make up for the shortfall. Sarkozy’s conservative government had pencilled in a GDP (gross domestic product) growth of 1.0 percent this year.

Greece Resolution On The Radar
Crushed by over 350 billion euros of debt and running out of cash rapidly, Greece is scrambling to appease the “troika” of its official lenders; the European Commission, European Central Bank and International Monetary Fund and finally fix a deal with private creditors simultaneously. Greece needs to organise a deal with creditors over the next couple of days in order to unlock and access its next aid package in order to avoid a chaotic and disorderly default.

Under the swap deal, private creditors would take a 50 percent cut in the nominal value of their Greek holdings in exchange for cash and new bonds longer term bonds. Their actual losses are expected to be much higher depending on the coupon, (the interest rate), involved. Estimates suggest that the total loss would be circa 70%.

Both sides have confirmed that the proposed deal is along the lines of a proposal made by Jean-Claude Juncker, the chairman of euro zone finance ministers, suggesting creditors had accepted his demand for a coupon of less than 4 percent, perhaps 3.5%. That would result in actual losses of close to 70 percent for creditors on their holdings. Sources close to the negotiations on Sunday confirmed that a deal was loosely in place with a coupon below 4 percent, however, any final agreement could not be clinched until euro zone finance ministers sign it off, effectively ratifying it.

Germany Shoots Warning Shots Across Greece’s Bow
German Economy Minister Philipp Roesler has called for Athens to surrender control of its budget policy to outside institutions if it cannot implement the reforms required under the euro zone rescue package. This suggests that even if the troika and private creditors agree an overall debt rescue/swap deal doubts still exist as to the long term viability of Greece to pay even with such austere cuts in place and 70% of the current debt wiped out.

In Berlin, Economy Minister Roesler became the first German cabinet member to endorse openly a proposal for Greece to surrender budget control. Roesler, who is also vice chancellor, told Bild newspaper, according to advance extracts of an interview to be published on Monday.

Iran Turns Tables On EU And Threatens To Turn Off The Oil Tap
In a remark suggesting Iran would fight sanctions with sanctions, Iran’s oil minister has stated that the Islamic state would soon stop exporting crude to “some” countries.

“Soon we will cut exporting oil to some countries, Iranian oil has its own market, even if we cut our exports to Europe,” the state news agency IRNA quoted Qasemi.

Iranian lawmakers debate a bill on Sunday that could cut off oil supplies to the EU in days, in a move calculated to hit ailing European economies before the EU-wide ban on took effect. Iranian officials say sanctions have had no impact on the country.

Another lawmaker, Mohammad Karim Abedi, said the bill would oblige the government to cut Iran’s oil supplies to the European Union for five to 15 years, the semi-official Fars news agency reported.

The EU accounted for 25 percent of Iranian crude oil sales in the third quarter of 2011, analysts believe that the global oil market will not be severely disrupted if Iran’s parliament votes for the bill that would turn off the oil tap for Europe.

Davos Jamboree Draws To A Close
Global finance chiefs have ended their luxury stay in Davos, near to the super elite’s skiing hideaway of Klosters. They exited the stage warning no economy is safe from Europe’s debt crisis, adding urgency to their calls for its governments to deliver a swift resolution.

Chief Executive Donald Tsang says efforts to deal with the two-year-old European debt crisis have fallen short of what is required. Speaking at the World Economic Forum in Davos, he underlined the seriousness of the situation. At the forefront of concerns are debt write-down talks in Greece.

Nobody’s immune. You need decisive action. You need to inspire confidence. I’ve never been as scared as I am about the world. Two months ago in Greece you could make do with a 20 percent haircut, now even 50 percent is not easy. Maybe 70 percent is needed, so do it quickly

Brief Market Overview For Sunday Evening
The euro has failed to extend last week’s advance versus the dollar in early trading before European Union leaders meet in Brussels today (Monday) to discuss the region’s debt crisis.

The yen has maintained a two-day gain versus the 17-nation euro. Italy prepares to sell bonds for the first time today since its credit grade was downgraded by Fitch Ratings on Friday evening. Fitch cut the credit ratings of Italy, Spain and three other euro-area countries on Jan. 27, a lack financing flexibility and firepower in the face of the regional debt crisis being the reasoning.

Italy, the Eurozone’s third-largest economy, was cut two levels to A- from A+. Spain was lowered two grades, to A from AA-. Ratings on Belgium, Slovenia and Cyprus were also reduced, while Ireland’s was maintained.

« Has Canada Gone Loonie? SHIBOR, Will This Be The Acronym Of The Decade For FX Traders? »