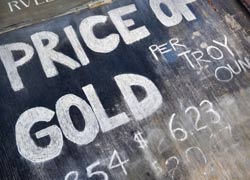 Gold fell for a third day, touching a four-month low and virtually wiping out its gains for 2012 as an escalation in the euro zone debt crisis and political turmoil prompted investors to move to dollars and German government bonds as safe havens.

Political upheaval in Greece, a change in the French presidency and renewed concerns about the resilience of the Spanish banking sector sent the euro to a 15-week low against the dollar and propelled German bond futures to record highs.

Gold was down 1.3 per cent on the day at $1,584.11 an ounce, having lost more than 3.5 per cent so far this week, marking its largest weekly slide since late December.

Gold has taken out a couple of important technical levels so the moves yesterday and today have been driven by technical selling, obviously assisted by a strengthening dollar and some investors’ need to cash in on liquid investments.

The gold price has been in decline for most of the past two months, since U.S. Federal Reserve Chairman Ben Bernanke gave no signal of the central bank’s intention to restart its asset-purchasing programme to increase money supply and keep market interest rates low.

The gold price is on the verge of wiping out all the gains for 2012, with the year-to-date gain reduced to 1.4 per cent from as much as 14 per cent in late February.

This compares with an 8.4 per cent advance in the S&P 500 and gains of nearly 10 per cent in Chinese equities and nearly 6.5 per cent in crude oil in 2012. It’s not as though the escalation of the political risk in Europe is doing anything positive for gold prices at all, and this is totally different to how we were between 2008 and 2010, when all the correlations were totally reversed and the weakening of the euro actually led to a strengthening in the gold price.

The drag of the single European currency on the gold price intensified on Wednesday.

Gold’s correlation to the euro, the frequency with which these two assets move in tandem, strengthened to reach a one-week. Gold priced in euros fell by 0.9 per cent on the day to a four month low of 1,222.29/euros an ounce.