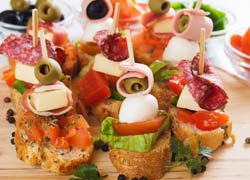 Does The ‘Buffett Tax Rule’ Belong In The Finger Buffet?

Feb 2 • Between the lines • 1696 Views • Comments Off on Does The ‘Buffett Tax Rule’ Belong In The Finger Buffet?

The grandstanding, show boating and vain-glorious pointlessness of the current USA politic system has been revealed by Obama’s party attempting to introduce a law that has no chance of becoming law. The people who’d make the decisions and take the vote, the multi millionaires up on Capitol Hill, (on both sides) aren’t turkeys, they won’t be voting for Xmas, ergo it has been a waste of time and effort.

‘Millionaires’ would pay a minimum 30 percent tax rate under the proposed law introduced on Wednesday evening in the Senate which has the backing of President Barack Obama. It’s named after billionaire investor Warren Buffett. The tax bill reflects Democrat Obama’s bid ahead of November’s general election to highlight the unfairness represented by Buffett’s tax anomaly; that he pays a lower rate of tax than his secretary.

The “Paying a Fair Share Act of 2012,” introduced by Democratic Senator Sheldon White house, has no chance of passage this year as the Republican-controlled House of Representatives has sworn off any new tax increases. Revenue generated from the tax has yet to be officially calculated, but White house estimates suggest that it could raise $40 billion to $50 billion per year.

In October, Senate Harry Reid, a Democrat, introduced the American Jobs Act, which included a first version of the Buffett rule as a 5.6 percent surtax on millionaires. It never came to a vote. About 94,500 taxpayers, a quarter of all U.S. millionaires, pay a lower tax rate than the bulk of middle-income taxpayers, according to the Congressional Research Service.

European News
Belgium is the first eurozone country to go into the inevitable double dip recession. According to official figures, Gross Domestic Product, for the eurozone’s sixth largest economy, fell by 0.2% in the fourth quarter. That follows a 0.1% fall in the previous six months meeting the European technical definition of recession as two quarters of decline.

Thursday witnesses Spanish and French bond auctions whilst the Greek government is preparing for various meetings ahead of talks with the Troika, amid the continuing ongoing saga of the country’s debt negotiations. French TV reported on Wednesday evening that the Greek PSI is completed. 72% NPV loss for bondholders. ECB to take no losses.

The IFS is warning that its central forecast (that the UK grows by 0.3% in 2012), would be undermined in the event that the eurozone breaks up. It estimates there is a 30% risk of a disorderly default in Greece, and a 10% risk of a ‘broad eurozone break-up’. Under the latter scenario, Greece, Portugal, Ireland, Italy and Spain would all leave the euro and establish new currencies, the IFS stated;

Broad Eurozone break-up could result from the failure of the authorities to agree a credible and permanent solution to the crisis, leading financial and business confidence to collapse. Italy and Spain would be unable to refinance debt maturing in early 2012, triggering a series of disorderly defaults. With the peripheral economies unwilling to accept even greater austerity measures, the Eurozone would then break apart.

Credit crunch fears reappeared on Wednesday, after the European Central Bank warned that Europe’s financial institutions tightened credit standards in the fourth quarter. The ECB’s quarterly Bank Lending Survey found that banks expect to make it harder for businesses and individuals to obtain loans in the first three months of this year. There was a drop in demand for mortgages and other home loans.

Market Overview
January’s appreciation in the MSCI All-Country gauge was the most since climbing 6.5 percent at the start of 1994. The S&P 500 rose 4.4 percent for the best January since it rose 6.1 percent in 1997. The STOXX Europe 600 Index added 4 percent after gains in insurers and chemical producers pushed the benchmark gauge for European equities up as much as 20 percent from its September low. The MSCI Asia-Pacific Index rallied 8 percent, advancing for a second month.

The Dollar Index tracking the U.S. currency against six peers fell 1.1 percent as the dollar slumped against all 16 major counterparts in January.

Forex Spot – Lite
The dollar was 0.5 percent from a seven-week low versus the euro on prospects that Asian stocks will extend a global rally, lessening demand for safe haven currencies.

The yen maintained the decline versus the 17- nation currency before U.S. data that economists said will show fewer Americans filed for jobless benefits, adding to evidence that the world’s largest economy is picking up. Equity markets globally advanced yesterday after reports showed manufacturing improved in the U.S. and Europe.