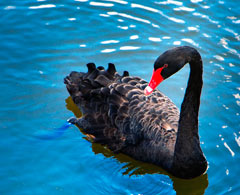 Oct 5 • Between the lines • 4501 Views • Comments Off on Black Swan, Unemployment and Anonymous

The UK Conservative party’s annual conference came to an end on Wednesday. Rumors have been circulating that the UK coalition government is about to cave into intense lobbying pressure and reduce the fifty percent rate of tax as, in the opinion of many Conservatives, it doesn’t actually provide a great deal of extra revenue. The suspicion is that a higher rate of tax also detracts entrepreneurs from setting up new business ventures. Both of these beliefs are unlikely to stand up to scrutiny. To imagine that an entrepreneur will be put off setting up a new venture due to concerns over the higher rate of tax is absurd. Similarly the fifty percent tax rate, applicable for those earning over £150k per annum, could actually generate up to £7 billion per annum according to the UK tax payers’ alliance. Not an insignificant sum when the UK is being lectured by its Prime minister to cut up its store and credit cards and live within austere means.

The USA democratic party is pushing forward with a ‘millionaire’ tax, and unlike the UK coalition govt. they’ve ‘done their sums’ properly. With luminaries such as Warren Buffett attempting to obtain support amongst his elite contacts for increased taxes on the wealthy this phenomena could gain traction. According to the maths an extra five percent tax on those earning $1 million a year would generate an extra $450billion a year. A massive sum that could underpin some crucial public works in the USA. President Obama’s jobs plan revealed in early September would cost circa $477 billion, the wealthy elite could therefore take pride that their extra tax contributions boosted employment opportunities in the system that has enabled them to benefit to such an extent. Senate Democratic leaders announced the proposal today as lawmakers press for a showdown over how to boost the economy. Majority Leader Harry Reid, a Nevada Democrat, said today the 5 percent tax would indeed generate up to $450 billion. Democrats dared Republicans, who reject tax increases, to block the plan.

Anonymous, a group of hacker-activists behind attacks on corporate and government websites, have vowed to erase the New York Stock Exchange “from the Internet” on Oct. 10. The group posted a message on YouTube declaring war on the world’s largest stock exchange in retaliation for the mass arrests of Wall Street protesters. The message didn’t elaborate whether the threat only referred to an attack on the NYSE website, which would have no effect on trading. Anonymous has launched several denial of service attacks on websites over several months, including actions in December against the sites of MasterCard Inc. and Visa Inc.

The threat is disputed by some members of Anonymous, who said on Twitter that it hadn’t been sanctioned. A posting on Anonnews.org said it was almost impossible to verify the operation because of the nature of Anonymous as an organisation “free of hierarchical structure.”

Nassim Taleb, author of the best-selling book “The Black Swan,” said today in a news conference in Kiev that the current global market turmoil is worse than 2008 because countries such as the U.S. have larger sovereign-debt loads.


Definitely, we face a bigger problem now and we will pay a higher price. The structure of the problem has still not been understood. We haven’t done anything constructive in three and a half years. Nobody wants to do anything drastic now.

Taleb popularized the term “black swan”, which derives from the once widespread Western belief that all swans were white until explorers discovered the black variety in Australia in 1697. He argued that unforeseen events with a large impact on markets actually occur more frequently than statistical analysis predicts, thereby justifying the high cost of hedging against disasters.

U.S. employers announced the most job cuts in two years in September, led by reductions at Bank of America Corp. and the military. Announced firings jumped 212 percent, the largest increase since January 2009, to 115,730 last month from 37,151 in September 2010, according to Chicago-based Challenger, Gray & Christmas Inc. Cuts in government employment, led by the Army’s five-year reduction plan, and at Bank of America accounted for almost 70 percent of the announcements. The drop in services employment, was however, at odds with a separate report from payrolls processor ADP showing overall private payrolls rose by 91,000, above economists’ expectations for an increase of 75,000. ADP said most of the gains, which exceeded August’s count of 89,000, came from the service sector.

Stocks rallied and commodities snapped their three-day slump as U.S. economic data topped estimates and optimism grew that European leaders will finally recapitalize banks. Energy shares lead the gains as oil surged following an unexpected drop in supplies. The SPX rose 1.8 percent to close at 1,144.03 at 4 p.m. New York time, adding to yesterday’s 2.3 percent surge to mark the biggest two-day gain in a month. The Stoxx Europe 600 Index climbed 3.1 percent, halting a three-day tumble. The S&P GSCI Index of commodities increased 2.8 percent as oil surged 5.3 percent to $79.68 a barrel, rebounding from the 7.9 percent plunge over the previous three sessions. The UK FTSE equity index future suggests an opening slightly up in the London session, the index is currently up 0.5%. the SPX future is down circa 0.3%.

Economic data releases that may affect sentiment in the morning sessions in London and Europe include the following;

The prediction is that both the UK and ECB base rates will be kept at the same levels. There were rumours developing early in September that the ECB were considering lowering the base rate, however, given the surprise rise in European inflation revealed last week, the rate rising a full half percent from 2.5-3%, any reduction in the base rate is highly unlikely.

« Deutschland über alles, or leading us up a blind alley? No Tequila Sunrise for Those who Bet on the Peso versus the Dollar »